I have never been fond of the whole exercising concept, even though I cry when the weighing scale tips more towards an extra 500 grams or so. Give me a dance class, and this girl is happy. But ask her to get on a treading mill or a climb stairs, you will be literally feeling the brunt of the whole ‘if looks can kill’ syndrome. You must be wondering why she is rambling about exercise on her usual Monday travel feature post. Well, you see someone who detests exercise has to climb up 390 steps and climb down 412 steps, the person will end up rambling.

Phnom chiso was an exerting and an underrated affair. There is no other way to describe it. Located 60 kms away from the city of Phnom Penh, it is one of those places that very few tourists care about and are curious about. During my extensive research of Cambodia, I taxed over every single nitty gritty details, but somehow I did not come across this place even once. Located at a 100 m high on a solitary hill, this ancient monument is perfect for a daytrip from the hustle of the main tourist attractions of Phnom Penh. Since I wasn’t very sure about the status of public buses in Cambodia and I wasn’t intending to become a living example of lost in translation situation, so I decided to hire a cab for an entire day and clubbed together two outskirt destinations – Phnom Chiso and Oudong Hill.

Well other than the taxing effort of climbing stair, the ruins of Phnom Chiso are pretty straight forward. As I started on this excursion, I came across this huge inscription stating the exact number of stairs one has to climb to reach the top. 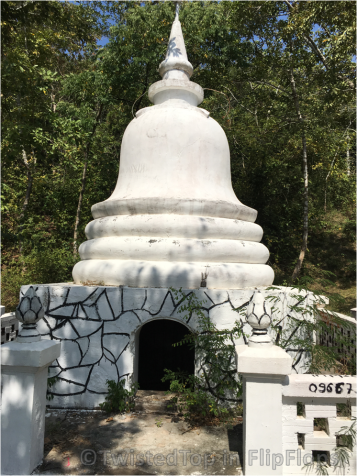 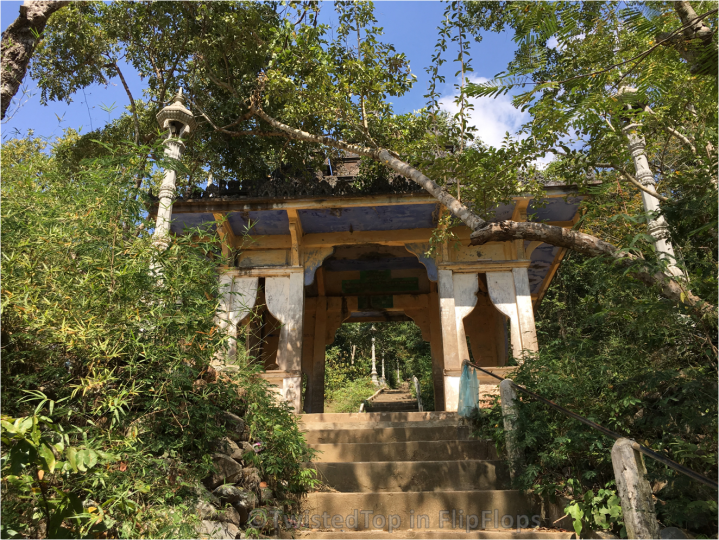 The original name of this Angkorian temple is Sri Suryaparvata or Suryagiri, both Sanskrit names meaning “mountain of the Sun”. However, unlike the meaning of the name, the temple is actually a dedication to both Shiva and Vishnu.

The monument is surrounded on three sides by a modern pagoda that serves as a home for monks and Buddhist devotees. I would definitely recommend making a stop in the pagoda. Beyond my fascination for Buddhist history, the main highlight of the modern monastery is a golden statue of the Buddha sheltered by a seven-headed Naga-king Muchalinda.

History textbooks says that most of the ancient Phnom Chiso temple was destroyed by bombs during the Lon Nol regime (1970 – 1975). During the war, the area was apparently shelled for consecutive 3 days and 2 nights based on the rumors of the place being a hideout for Viet Cong soldiers. Rumor has it that, although two bombs came through the roof landing in the center of the temple, neither exploded.

After seeing the magnificence of the temples of Angkor, I was definitely a bit underwhelmed seeing the ruins of this monument. 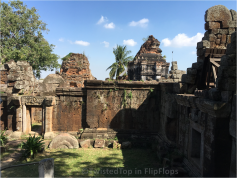 Though the structures are now standing tall and proud among a dense growth of vegetation as a testament to true test of time, the most enjoyable part of this excruciating trek would be the stupendous view of paddy fields. 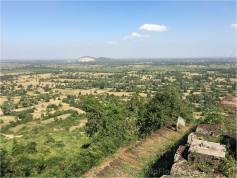